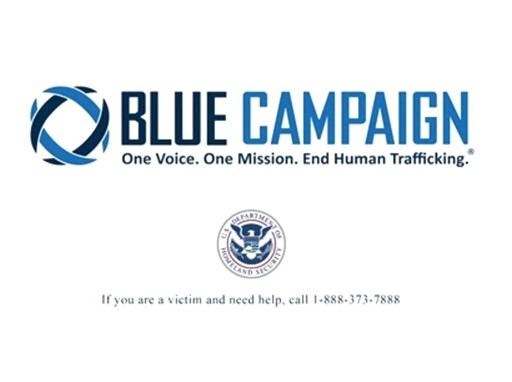 Human trafficking is one of the most heinous crimes and it happens throughout the United States – in cities, suburbs, and rural areas. Victims of this crime are deprived of their basic rights as traffickers use force, fraud, violence and/or coercion to obtain commercial sex or labor.

As you have likely seen and your station has likely reported on, human trafficking is happening with increasing frequency and despite often happening in plain sight, it can be challenging to recognize and subsequently, report. Millions of people each year are trafficked and unable to report or seek help for themselves. We must change this.

Your station can make a difference by airing the Department of Homeland (DHS) Security Blue Campaign’s “Neighborhood Watch” PSA to help increase awareness and understanding of this crime. English and Spanish language versions of the PSA are available, as are :30 and :60 versions.

“Neighborhood Watch” encourages the general public to learn and recognize the indicators of human trafficking, be cognizant of our surroundings, and if something does not appear to be right, report it to the proper authorities.

Blue Campaign is DHS’s national human trafficking education and awareness campaign. Since 2010, Blue Campaign has worked in collaboration with law enforcement, government, and private organization to increase awareness about this crime as well as how to recognize and report it, and ultimately, end it.

We encourage you to put this PSA into your rotation and appreciate your consideration. You can find more information on Blue Campaign at https://www.dhs.gov/blue-campaign. Together, we can end trafficking in the United States.

ADD ALL TO MEDIA CART DOWNLOAD ALL Highest quality files will be downloaded for all the assets. If you need a different quality of the file please download the asset individually.