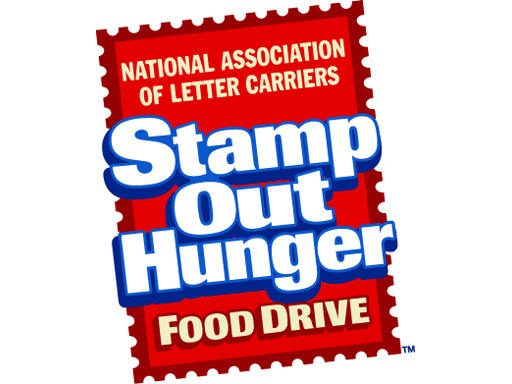 The 24th annual National Association of Letter Carriers' "Stamp Out Hunger®" Food Drive is on Saturday, May 14.

Letter carriers touch every residential and business address in America at least six days a week, and our continued effort in the fight against hunger in America has made us all too familiar with the staggering numbers of people in need. The availability of nutritionally adequate and safe food, or the ability to acquire such food, is limited or uncertain for 1 in 6 Americans, many of whom are in households with at least one person working. These are the households of single-parents with young children, grandparents helping to raise their grandchildren, college students or households that have a member who is a veteran or has served in the U.S. armed forces. These are folks who are doing everything "right," often working more than one job but still unable to make ends meet.

On Saturday, May 14, we once again ask that postal customers leave bags of non-perishable food by their mailboxes well before the time their letter carriers make their normal mail pick-up and delivery. (Some postal customers in some regions of the country may receive in the mail specially marked food drive bags, but please note that all bags are welcome—paper or plastic.)

The Stamp Out Hunger Food Drive is held annually on the second Saturday in May, a time of year when food bank stocks are dwindling—and it's just before many school systems end their years, which can often mean a suspension in subsidized meals for many students.

The drive is the largest one-day drive in the United States, taking place in more than 10,000 cities and towns across America. Letter carrier participation in the food drive is strictly voluntary. And all food collected in the drive stays in the local area.

Founded in 1889, the National Association of Letter Carriers represents nearly 280,000 city letter carriers who work for, or have retired from, the United States Postal Service.

The drive is fully supported by USPS, an agency that receives no tax dollars for operating expenses and that relies on the sale of postage, products and services to fund its operations. A 2015 Pew Research Center poll again ranked the Postal Service as the most trusted federal agency.